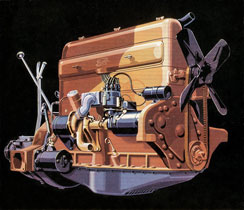 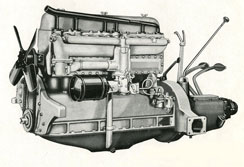 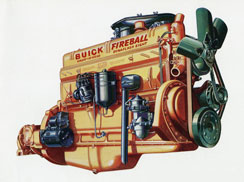 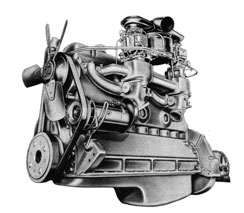 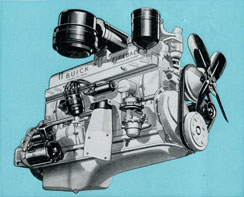 Please choose an option below:

Buick employed Straight-8 engines in all models from 1931 through 1952 and in the Specials in 1953 when the nailhead V-8 was introduced in the Super and Roadmaster models.  These engines were rugged and established Buick's lasting reputation for engines which produce gobs of low-end torque.  Torque became a design imperative which guided Buick engineers ever after.

These engines had some commonalities throughout this 23-year period, but development and refinement was continuous.  In the beginning, there were 3 variations, 220 cubic inch (CI)with a compression ratio (CR) of 4.75:1 and 77 brake horsepower (), a 272 CI with 4.63 CR and 90 , and 344 CI engine with 4.5 CR and 104 .  The 1931 engines had a crank with 5 main bearings, mechanical valve lifters, and updraft carburetors.  It is interesting to note that Red Shafer used a modified 272 CI engine in a racer which started 23rd and finished in 12th place in the 1931 Indianapolis race.

The small engine was increased to 233 CI in 1935 and the others were replaced with a 320 CI engine in 1936.  Continued change in the dimensions of the small engine continued through 1953, but the big engine's basic dimensions remained until the last was installed in 1952.  The small engine was increased to 248 CI in 1937 and to 263 CI in 1950.  The 320 CI engine is physically longer than the small engine, but the small engine has the same external dimensions, regardless of displacement, leading to a popular substitution of the 263 CI engine in models dating back to 1937.  The small engine evolved from one producing 77 in 1931 to 128 in the configuration used in the 1951 and 1952 models equipped with Dynaflow automatic transmission.  The 320 CI began with 120 and ultimately produced 170 .  The performance increases were in part due to changing internal engine dimensions and compression ratios.  Carburetion, valve operations, combustion chamber design and other refinements added to the improved performance.

The early engines had no interchangeable parts between engine sizes.  That is not true for the small engine introduced in 1937 and the large engine introduced in 1936.  The apparent commonalities in the later engines has both advantages and disadvantages for Buick restorers.  It makes possible replacing some components in early engines with late model counterparts.  Yet, there are external changes which detract from authenticity if blocks are swapped.  Some of the more significant improvements to the basic straight-8 design incorporated during the 23-year period follow.

1934 - A chain timing drive, belt-driven generator and water pump powered by the fan shaft eliminated the need for the accessories shaft.  The 1934 engines also included a control which enabled changing the distributor timing by the driver from inside the car.  A downdraft carburetor was first applied on the small engines replacing the updraft models which were used from 1931.

1935 - Downdraft carburetors used on all engines.

1938 - Domed "Turbulator'' pistons employed which resulted in improved combustion in addition to increasing the compression ratio.  The resulting brake mean effective pressure was 5 to 12% greater than any other competitive engine.

1940 - A larger, more reliable oil pump was introduced along with an improved radiator and a 7 psi radiator cap.  Buick also begin using a "assembly balancing" technique which tested each engine complete with clutch to eliminate unwarranted vibrations before installation.

1941 - Compound carburetion introduced on all Super, Century, and Roadmaster models as standard equipment and available as an option on all Specials.  This year 10 mm spark plugs were also used and the forerunner of a PVC (positive crankcase ventilation) system was pioneered which vented the oil vapors to the carburetor through a small tube from the top of the valve cover to the air cleaner.  Compound carburetion continued through the limited 1942 production, but was discontinued after World War II.

1946 - A new method of finishing the cylinder walls was inaugurated.

1947- Full precision insert bearings were used on the crankshaft beginning in mid-1947.

1948 - A new "Flex-Fit" oil ring was fitted to the pistons, an improved oil filter was installed, and a new engine/transmission assembly rubber-mounting system was installed which dampened engine and road vibrations to provide passengers a smoother ride.  This year also marked the first use of the Dynaflow automatic transmission.

1949 - Insert-type bearings replaced the poured babbit bearings in the connecting rods in mid-1949.

In proper working order, there should be no problems with engine cooling with the Straight-8 engine, except for the 1939 model which is starved for air flow due to the grille design.  Block deposits or partially plugged radiators can cause overheating.  In 1948, a revised thermostat with a bypass orifice was offered which can be installed in earlier engines.  Finally, the exhaust manifold valve, which incorporates a thermostatically-controlled baffle intended to speed carburetor warm-up and gasoline vaporization can stick closed and contribute to overheating. This valve must work under extreme temperatures and erosive exhaust flows.  Over time, these effects can disrupt the smooth movement of the valve on its shaft and the thermostatic spring can lose its temper.  Replacements for the thermostatic spring are available and the exhaust valve can be rebuilt.

The compound carburetion used in 1941 and 1942 was the forerunner of the 4-barrel carburetor.  Normal operation up to about 50 mph, including starting, used the front carburetor, although both carburetors functioned at idle.  When greater speed and/ or acceleration was desired, linkage activated the rear carburetor which had no choke. Compared to the hot rod type of other factory-produced multiple carburetion installations in later years, Buick's was simple.  Yet, failure to properly adjust carburetor linkage earned this innovation an unwarranted bad reputation.  Beginning in 1936, Buick used carburetors from two suppliers to ensure that assembly would not be stopped because of supplier failure.  Stromberg was the principal supplier and Marvel the alternate.  The following year, Carter became the alternate.

The 10 mm spark plugs introduced in 1941 frequently fouled leading to many complaints.  This was not the fault of the smaller plug as many believed, but was principally caused by poor quality fuel than available.  The problem was of sufficient concern that the factory authorized revisions to the head to use 14 mm plugs (a simple machining operation because the heads were originally cast for use with 14 mm plugs). However, for those with engines still equipped today with 10 mm plugs, the quality of today's fuel obviates the need to change to 14 mm plugs.

The oil dipstick was moved from the lower right flange of the block, just above the oil pan, to a point below the head at the rear on the passenger side in 1940.  The coil mounting was moved from the side of the block near the distributor to the firewall from 1940 to 1947 and then back again to the side of the block.  Prior to 1948, the small engine front motor mounts attached to a plate bolted on the front of the block.  In that year, the blocks were cast with a mounting boss about one third of the engine length from the front.  By using the earlier mounting plate, the later engines can be installed in earlier cars, although the mounting bosses on the block will let the knowledgeable know that the engine is not authentic.

The single exhaust manifold used on the small engines without compound carburetion is prone to cracking.  There are few originals remaining and they are delicate.  They should never be unbolted from the engine unless cold.  Otherwise, they will warp making refitting difficult and the added stresses can exacerbate the potential for cracking.  The connecting rods with insert-type bearings can be used in engines originally equipped with poured babbit bearings for their convenience.  It is important to maintain the smooth-running characteristics for which the Straight 8's are noted that replacement rods be balanced.  The insert type main bearings used after 1947 can be used in earlier engines.

Parts for the later small (248 to 263 CI) engine and 320 CI engine are readily available from companies devoted to Buick hobbyists and restorers.  Some are even available from common parts companies like NAPA.  For the early engines, 1931 to 1933, obtaining parts is more problematic.  It is recommended that those interested in these engines contact noted 1932 Buick expert, McClellan G. "Mac" Blair, 3000 South Warren Road, Indiana, PA 15701 for assistance and information about parts.

Shop Manuals for these years can be obtained in original form at swap meets and from literature vendors advertising in magazines serving the hobby like Hemmings for $40 to $60.  There are also reproductions of these manuals available.  Buick produced a well-engineered engine and excellent information regarding engine maintenance, re-building, and tune-ups.  Any owner interested in working on these engines should follow obtain the manual for appropriate year and carefully follow Buick's instructions.

For those interested in swapping parts between engines, an official parts book(s) covering the years 1931 to 1953 is an invaluable aid.  These can also be obtained at swap meets and from literature vendors, but they are more rare than the shop manuals and generally command a higher price.

William C. Anderson has authored an authenticity manual for 1941 Buicks, Restoration Facts, 1941 Buicks.  This book is the first of its type for Buicks and provides all details necessary to correctly restore the 1941 Buick engine, engine compartment, and all other facets of the automobile.  This book is available from Anderson Automotive Enterprises, 2198 Johns Hopkins Road, Gambrills, MD 21054 for $39.95 plus $6 for delivery (US) (MasterCard and VISA accepted); www.andersonautomotiveenterprises.  Much of this information is applicable to restoration of earlier and later engines and engine compartments.

Anderson Automotive Enterprises also offers a technical paper covering the cosmetic restoration of 1950 Buick engines and engine compartments which can be obtained for $5.